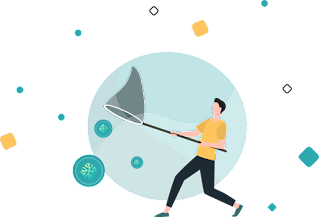 With our new smart contract, the Consensus Connection, you can lock the value of supported cryptocurrencies for a specified time with another user. To get out of the lock you need the private keys of both parties, rather than one (or to wait until the end of the contract!). This should encourage people to hold currency, as the decision of two is needed rather than one – improving stability.

As consensus connections between users are continuously established a huge relative consensus network is formed. This is what we believe will be the ATM community.

Then, using our ATMRank algorithm that is based on Google’s PageRank, we calculate each user’s influence in the network by evaluating the consensus connection they have made with other users based on parameters such as the value locked, the length of time locked and the currency that was used. Rewards are then proportionately distributed based on that users influence ranking!

Furthermore, we are working on a wormhole contract that will allow crosschain consensus connections to be formed, essentially creating a relative consensus network that encompasses the entire cryptocurrency ecosystem.

ATM will also be community governed. Community members will be able make proposals and also vote on them by making use of the governance token LUCA (that is given as a reward for making connections!). Through this decentralized mechanism, the ATM project will grow in the direction that the community decides.

ATM objectives in nutshell :
– Create a stable network based on a combination of network and financial aspect
– A strong algorithm based on Google PageRank to determine the ranking of each user/influencer
– Not competing with other crypto but embracing the cryptosphere to present a universal token
– a platform for the community govern by the community, the most actives ones.
– Universal platform that will allow more projects to be developed if accepted by the community

No comments to show.

You may have missed

2 February, 2022
CIND token of ‘Cindrum’ will listed on Bibox and Bittrex

CIND token of ‘Cindrum’ will listed on Bibox and Bittrex

CIND token of ‘Cindrum’ goes live on Bibox and Bittrex